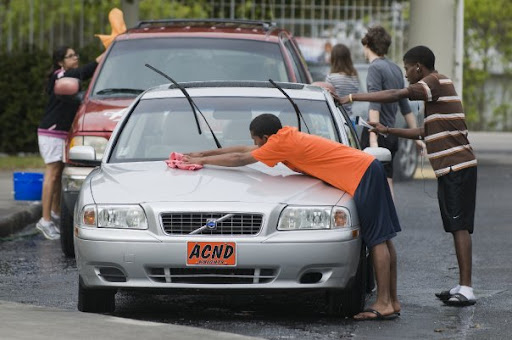 Rusnak is a professional photographer and ‘artful poet’ who primarily captures life in Latin America and the Caribbean. This mini exhibit will be made up of nine 5’x5′ black and white images. His work has recently been on display at the World Bank in Washington, D.C., KONA Gallery, CA, and George Mason University, VA and he has spoken about his work to people of all ages including engagements at the University of Florida and University of Central Florida.

Organized by the school’s Edmund Rice Community (ERC), ‘HungerFest’ is a yearly event that raises consciousness of poverty and world hunger through Lenten practices of prayer and almsgiving.  ACND students spend two days bagging lunches with products donated by the student body as well as the community. They also wash cars for a nominal donation.

To demonstrate solidarity for the poor, HungerFest participants abstain from food and drink, other than water, from Friday afternoon until Saturday evening.  The bagged lunches will be delivered to the Camillus House (a non-profit organization that provides humanitarian services to men, women and children) and the Miami Rescue Mission. Last year’s HungerFest event raised $4,200 for Haiti earthquake relief and produced a record setting 2,856 bagged lunches.

Rusnak will speak at an ERC student organized event on Friday, February 25th at 6:30 p.m. in the ACND cafeteria about his work as a humanitarian photojournalist for ‘Food for the Poor, Inc.’ – an international relief and development agency. The exhibit demonstrates how Rusnak uses the foundations of solid journalistic story-telling to fundraise for the poor. His works depict poverty in Honduras, Haiti, the Dominican Republic, Guyana, and Guatemala.

Prior to working for the

‘Food for the Poor, Inc.,’ Rusnak was a newspaper photojournalist for nearly 10 years, having worked for Agence France-Press, the Indianapolis Star, the Fort Myers News-Press and the Ann Arbor News. His work has been recognized by Pictures of the Year International, the Best of Photojournalism, the Gordon Parks photography competition, the New York Photo Awards, the International Photography Awards, Photo District News, the Atlanta Photojournalism Seminar, the Alexia Foundation, and the China International Press Photo Contest.

about his work: “Working in the tropics, I have often been struck by the irony of people struggling to survive in what should be an idyllic setting. The poor search daily for adequate food, shelter and water under the same sun and palms where vacationers play. And despite their hardships, the poor still have the hope and faith to dream of living in the paradise that surrounds them.”

Donations of non-perishable food items such as peanut butter, jelly, juice boxes, and bottled water are currently being accepted from Monday to Friday 8:00 a.m. to 4:00 p.m. in the ACND’s main office.

The traveling exhibition History, Labor, Life: The Prints of Jacob Lawrence explores three major themes of Lawrence’s larger oeuvre and specifically focuses on his graphic work. Lawrence’s recording and recollection of African-American and larger African diasporic histories are featured, as … +

The photography of Johanne Rahaman, and curated by Dr. Jeffreen M. Hayes, this exhibition presents images from the BlackFlorida project, an archive of photographs and personal histories that documents the people and everyday life of … +

Through a large donation of Cuban art in 2017, an earlier donation of Latin American art in 2011, and significant gifts through acquisition funds, the Jorge M. and Darlene Pérez has added more than 500 … +