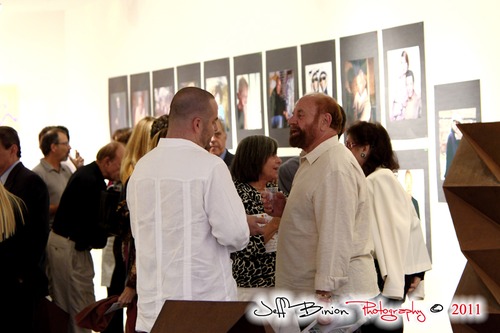 Stefano Campanini, owner of Etra Fine Art graciously stepped in and offered his gallery as the new host location following Vino e Olio’s (the original location) announcement of its temporary closure only two days prior to the anticipated SFF party.

Founded along with Alicia Restrepo in 2004, Etra Fine Art strives to bring the best artists to Miami and its international audience. The gallery has been the backdrop to many social events, poetry readings, theatre performances and inspiring lectures.

Campanini has made a substantial contribution to the Miami art scene and to education. His efforts include, hosting a benefit event to restore the playground at Blue Lakes Elementary Autism Academy and donating over $10,000 in artwork to sponsor Miami-Dade County Public School’s Sixth Annual Education Awards. Campanini serves on the boards of ‘Arts For Learning’ (an institution that teaches art to 20,000 children in Miami-Dade County) and ‘Romance In A Can’ (Miami’s romantic film festival.) He is founder of ‘La Casa de la Mujer de las Americas’ (a not-for-profit that helps women and their families across South and Central America who are victims of violence.) 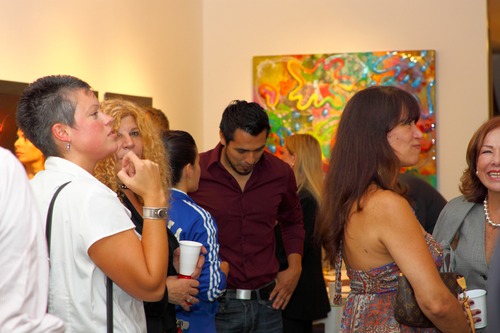 Campanini states: “I am very happy to help my friend Emanuele Viscuso and to support this cultural event in Miami. I never believed in art forms being separated. They all come from the same creative instinct whether it be cinema, painting, sculpture, or ballet. To host the opening party for the Sicilian Film Festival is my small contribution to a beautiful event that unveils Miami’s artistic beauty.”

On display was a selection of photographs from the exhibit: “Roberto Granata: A Sicilian Photographer in Hollywood.” Granata is recognized worldwide for his portraits of Hollywood’s most famous celebrities including Robert de Niro, Andy MacDowell, Anne Hathaway, Diane Keaton, and Isabella Rossellini. Granata will be flying in from Rome to speak about his professional work as a photographer and head of the Fondazione Roberto Granata.

Proceeds from the sale and auction of his work (that spans over forty years) help children who are displaced and orphaned by earthquake tragedies. Since 2009, his foundation has benefitted orphanages or organizations that offer support to children in Haiti, Pakistan, and Italy. 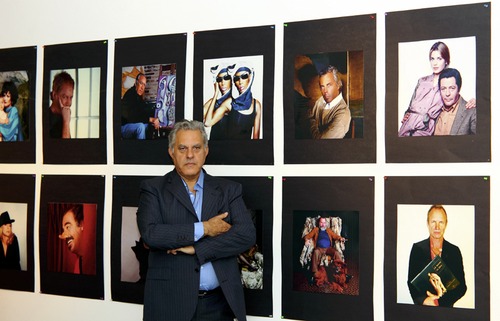 Roberto Granata was born in Catania, Italy in 1945. From an early age he was fascinated by the interplay of light, texture, and detailed color variations found in the natural surroundings of his hometown. Granata has enjoyed an extensive career as an international photographer. He studied and began his career as a journalist working with the Editor Press Service in Milan and Los Angeles. At twenty, he worked as an apprentice for Giampaolo Barbieri who is considered to be one of the best Italian fashion photographers. By 1976, he was working as a portrait photographer for Italian Vogue. Over the course of twenty-five years, his work has been seen on the covers of Paris-Match, Interview, Photo, Epoca, Playboy, Maison et Jardin/Homes and Gardens, Moda, and Vogue Italia. His work has been exhibited throughout Italy for many years.

About the Sicilian Film Festival

Celebrating its sixth year, Sicilian Cinema has made a name for itself thanks to the Sicilian Film Festival (SFF).  The seven-day Festival was created in Miami in 2006 by the Sicilian-born sculptor, musician, writer, and designer Emanuele Viscuso. Now residing in Miami Beach, Viscuso seeks to underline the importance of Sicily, its cinema, literature, art, food and wine, fashion, and culture on an international platform.

While based primarily in Miami, the SFF holds events in both US and other cities worldwide. An official proclamation of a Sicilian Film Festival Day in 2007 recognized the cultural impact the Festival has had upon the City of Miami. When presenting Emanuele Viscuso with a Key to the City, Miami Beach Mayor Matti Bower said, “We appreciate the efforts of this Festival in bringing the Sicilian culture to the fore and sharing the beauty and life of Sicily with the people of Miami and the U.S.A. Through theater, music, art, and love, boundaries are traversed and all nations learn to share each others works and get to understand and appreciate different cultures.”

Screenings and events continue until Wednesday, April 13th with a closing dinner at the home of SFF President, Emanuel Viscuso. For more information visit http://www.SicilianFilmFestival.com.

“This is perhaps the only science-fiction film that can be called transcendental.” – Owen Gleiberman, Entertainment Weekly Modern science fiction wouldn’t be what it is today if not for Ridley Scott’s Blade Runner, the seminal … +

“A movie like none other I have seen before…a film in which the inner chambers of the soul are laid bare.” – Roger Ebert “One of the great hallucinatory experiences in cinema, a visually intoxicating … +

Can a fabled stone offer another path for Matilde’s life on her Mexican rancho? And the choices we make at mealtime sometimes have a very big impact, especially for a seemingly picky eater with a … +

CGAC pays tribute to exploitation auteur Doris Wishman with a screening of a new digital preservation of her sci-fi classic, Nude on the Moon, a 1961 romp about a tropical society of topless aliens on … +

“It’s arguably the best Batman-adjacent movie since The Dark Knight. The must-see factor of Phoenix’s riveting performance alone — it’s both unsettling and weirdly affecting — will be significant.” – Todd McCarthy, The Hollywood Reporter … +